News is important, especially for populations in countries in war, or struck by disasters. South Sudan, the youngest country in the world, is struggling since its Independence in 2011. Journalists have a very tough time. By now a dozen have been killed, others hurt and quite a number have left the profession for good.

Radio Easter in Yei: An enthusiatic group of journalists

In a war like situation like South Sudan the truth is often not appreciated by the warring sides. News reporters in the country juggle with how to bring the truth and not getting punished for it.

Lack of a good journalism education also plays a role. Reporters try their best but are sometimes not sticking to the media rules.

Catholic Radio Network, CRN, (http://catholicradionetwork.org/) hired me to train the news desks at seven of their nine stations.

Of the two other stations, one is in Malakal but is off air due to the continuous insecurity. The other one is in the Nuba Mountains in Sudan.

Radio Emmanuel in Torit: The best reception for internet is here

It was a crash course in how to report without getting into life threatening problems, how to report in a clear and easy to understand news items and to change from a 1980’s format to a modern 2015 style.

The project was funded by Cafod (http://cafod.org.uk/) and consisted of me traveling by air and road to the stations and to help out where I could.

It was an amazing experience and I take my head off for the courage and the persistence of mainly young journalists who don’t want to be intimidated, earn a small salary but realize how important their work is! 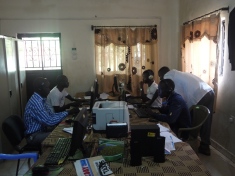 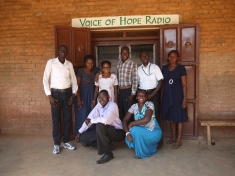 Voice of Hope in Wau: THE A-team