Just before the end of the year a short workshop on reporting in the refugee camp Dadaab. At present half a million Somali refugees consider the area in northeast of Kenya as their home. A considerable number of journalists are among the camp population. The workshop was on reporting on sensitive issues.

Some of the refugee journalists work for national and even international press, but mostly for local outlets and radio stations. They all touch in their reporting on sensitive issues whether it is the still volatile situation in the homeland Somalia, or the state of affairs in the refugee camp run by the UN and other international aid organisations. International Media Support , IMS, (https://www.mediasupport.org/) organised a workshop on working in a volatile surrounding.

The fourteen journalists that attended were at different levels of experience and schooling. Some had solid work experience in Somalia or Kenya, while others had little idea about ethics, rules and regulations of the media. 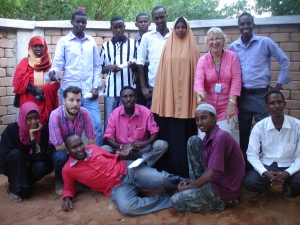 Well balanced reporting is necessary everywhere in the world, more so in the conflict situation of the area where Dadaab lies. The three day workshop focussed on a variety of issues that help to get a better understanding of what is needed for balanced and as neutral as possible reporting.

The training was carried out in Dadaab where there were no equipments such as recorders and computers. Activities were therefore limited to discussions in which the trainees were encouraged to come up with as many answers and solutions themselves, and role play. The role play particularly proved to be powerful examples of real life situations.

Journalists and also interviewees who are named by name are at great risk in Dadaab where Al Shabaab is active and has ears on the ground. People and places are often not named in order to protect the identity of the journalists and the people who give the information.

There is great enthusiasm for the job. All the trainees were convinced of the need to give the voiceless a voice, but they need and deserve more guidance in doing that the best possible way.