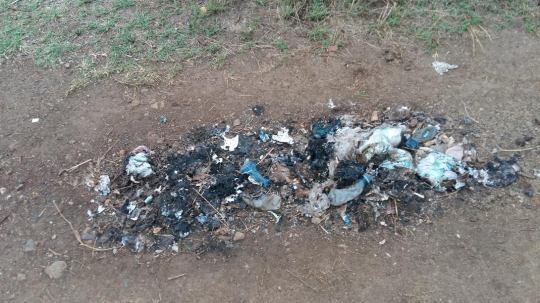 Is there a correlation between garbage and corruption?  It interests me as I see the area where I live slowly but surely choking in litter and dumped garbage.  Thousands of people trod along Magadi road in Nairobi to and from work. Too poor to afford a bus ride. They litter plastic soda bottles, plastic milk packages, wrappings of food.

And then there are obviously the people with more money, judging from the garbage they dump in the bushes.  Expensive diapers and expensive fruit juices, bottles of hard liquor, pizza packaging.  I reckon they don’t want to spend money on garbage collection which is privatized as the county of Nairobi.

the littering growing together with the number of articles about the enormity of corruption. More and more experts say that although corruption has been there for decades it has never been so wide spread and astronomical as now.  I must say that some of the amounts that have disappeared from ministries are mind boggling.

I wanted to do something at least along the stretch of road where I live. There are plenty of animals which escaped (temporarily or not) from the game park on the other side of the road which are attracted by the garbage. They get chased by people on foot and run often unto the busy road. They either get killed or drivers are forced to come to a screeching hold.

Nairobi county council asking to clean up would be a futile effort so I asked Kenya Wildlife Service (KWS) to help. After two emails and several months later I realise that it’s not a priority.  The garbage is the fault of the population but I had hoped KWS would be more concerned about the wildlife which it should protect

I am left with the hope that corruption will reduce one day and so will the littering.