Dancing feet kick up the dust. Songs fill the evening air in Yida. The refugee community from the Nuba Mountains holds a memorial for one of their hero’s. It is exactly fifteen years ago since Yousif Kuwa died who was in the nineties the commander of the Sudanese People’s Liberation Army (SPLA) in the Nuba Mountains.

The memorial is held in the Nuba cultural center, some simple structures holding paintings and artifacts. It is amazing where the dance groups, representing one of the many groups that form the Nuba, found material for their costumes. There is hardly anything in the camp. Even the many trees that were there, three years ago, have vanished. Used as firewood for cooking.

Shadia, who chairs the Nuba women committee in the camp, begs me not to take pictures of a group which called itself the “crazy ones”. She insists: “Nuba people should not make a bad impression.” But I can’t resist their costumes, made of whatever was thrown away and could not be used for alternative things.

I am the only foreigner attending the memorial. At some stage women get hold of me and put a sisal bandana around my head. With difficulty as my hair is too slippery. “Now you are an honorary Nuba woman.” 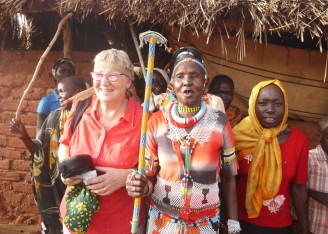 I wear the itching honor around my head until it’s time to go back to the compound where I stay. I talk on the way back with a friend of Kuwa. “He was a special man. He was not only a good soldier but he also explained the Nuba people the cause of the SPLA and asked for their help and cooperation. He also introduced self-government for the people.”

Kuwa was also a poet. During his university years he wrote:

“Africaness is my identity, It is entrenched in my appearance, It is engraved in my lips and manifested in my skin. My africaness is in the sound of my footsteps, it is my bewildered past and in the depths of my laughter.”